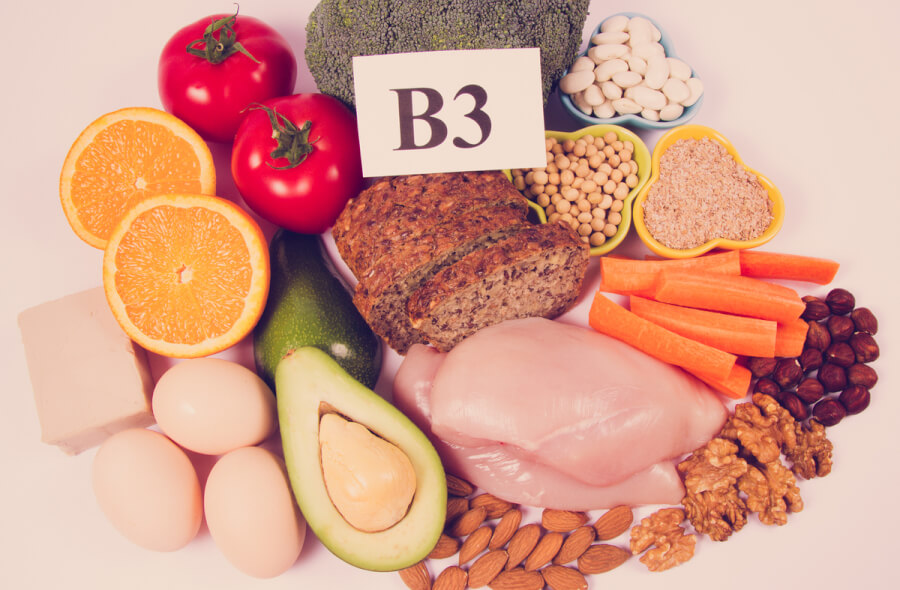 B-complex vitamins are particularly supportive of healthy erectile function. Getting enough of them in your diet can help to prevent erectile dysfunction.

Essential for overall human health, B-complex vitamins also help to support erectile function and other aspects of sexual health and function. Getting at least the minimum daily requirement of these vitamins can help to preserve normal erectile function for as long as possible and may help to ease symptoms of erectile dysfunction if they should develop.

While virtually all B-complex vitamins offer some benefit for erectile function, four of them appear to be particularly beneficial in their support of male sexual health. These four include vitamins B3, B6, B12, and folic acid, also known as vitamin B9. Although all of these B vitamins are available in supplement form, it’s usually better to get them from food sources whenever possible.

Vitamin B3, also known as niacin, is a particularly potent weapon against ED, based on findings from a Chinese study published in October 2011. That study, conducted by researchers at the Chinese University of Hong Kong, was designed to determine the effect of niacin supplementation on men suffering from both ED and elevated cholesterol levels.

Men with high levels of cholesterol in their blood are more likely to develop atherosclerosis, a buildup of fatty plaque on the inner walls of arteries. This buildup of plaque effectively narrows the space through which blood can flow and diminishes the amount of blood the affected arteries can carry. And the biggest single cause of ED is insufficient blood flow to the penis, which accounts for roughly 80 percent of all ED diagnoses.

What the Study Showed

The Hong Kong research team recruited 160 men, all of whom suffered from both ED and elevated cholesterol levels. The men were randomly assigned to two groups. The first received daily doses of up to 1,500 milligrams of niacin daily, and the second got placebo daily.

After a dosing period of 12 weeks, the men who received niacin showed significantly improved erectile function over those who got only placebo. The improvement was especially notable in men who suffered from moderate to severe ED. Results from the study were published in the October 2011 issue of The Journal of Sexual Medicine. Foods high in niacin include liver, peanuts, tuna, and turkey breast.

How Vitamin B6 Helps

Vitamin B6, also known as pyridoxine, increases brain levels of the neurotransmitters responsible for sexual satisfaction. It also optimizes blood levels of testosterone, the primary male sex hormone. As with all the B vitamins, it’s available in supplement form but is plentiful in foods such as beef, buckwheat, cabbage, carrots, dairy products, eggs, green peppers, liver, melons, and oatmeal.

Vitamin B12, or cobalamin, supports the nervous system, which plays a key role in erectile function. This vitamin, which like all B-complex vitamins is water-soluble and must be replaced on a daily basis, is found primarily in animal-based foods. These include organ meats, such as the heart, kidney, and liver; cheese; other meats; poultry; and seafood, including crabs, salmon, and sardines.

Folic acid, the synthetic form of vitamin B9 or folate, also appears to promote robust erectile function by lowering blood levels of homocysteine, which can lead to endothelial dysfunction and impaired blood flow to the penis. A small-scale study at Italy’s Sapienza University of Rome indicated that a deficiency of folic acid is likely to lead to erectile dysfunction, presumably because the lack of folic acid allows homocysteine levels to spike. The Italian study was published in the June 2018 issue of Aging Male.

For men whose ED is caused by impaired vascular function, Viagra and the other oral ED medications known as PDE5 inhibitors are clearly the treatment of choice. If the convenience of ordering these drugs online appeals to you, check out the many services available from eDrugstore.com, a longtime online facilitator. To learn more, visit its Erectile Dysfunction page.