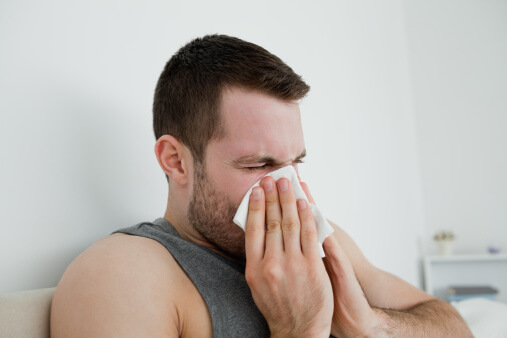 Many Americans as well as people in other countries mistakenly think that the arrival of winter and cold weather means at least a seasonal reprieve from the pesky symptoms triggered by allergies. Sadly, it isn’t so. The only things that change as you spend increasing amounts of time indoors are the agents that trigger your allergic reactions.

While grass and tree pollen, ragweed, and mold spores account for the lion’s share of warm-weather allergies, during the winter the culprits are usually dust, dust mites, pet dander, and mold spores of both the indoor and outdoor variety.

If there is any truth to the adage that misery loves company, it may ease your allergy symptoms a bit to know that you’ve got plenty of company. WebMD estimates that more than 40 million Americans are allergy-prone year-round.

It’s Not a Cold, Stupid!

All too often, people who fall victim to winter allergies mistakenly assume that they’ve come down with a cold or sinus infection. However, sneezing, wheezing, itchy eyes and nose, coughing, and a runny nose that last more than a week almost definitely can be blamed on allergies.

As allergist Steven H. Cohen, M.D., tells WebMD, ¨colds come, they’re there for three, five, seven days, and then they go away, but allergy symptoms persist for much longer and may be intermittent.¨ Now in private practice, Dr. Cohen was on the faculty of the Medical College of Wisconsin for seven years.

In addition to some of the indoor allergens already cited, some allergens typically associated with the outdoors have an insidious way of getting to you even when you’re spending most of your time inside the warmth of your home, according to Asriani Chiu, M.D.

How Outdoor Allergens Creep In

Dr. Chiu, associate professor of pediatrics and medicine at the Medical College of Wisconsin, tells WebMD that many winter allergies are triggered by some of the same allergens that trouble us during the spring, summer, and fall. For example, she notes, decaying plant matter, including leaves and grass, provide an ideal breeding ground for mold and mildew, which can then be tracked inside on the bottom of footwear or elsewhere on the outerwear of household residents.

Another way in which outdoor allergens make their way into the home is in the form of cut firewood, which is stacked outside in generally damp environments where the firewood eventually plays host to mold spores. As the firewood is brought inside to feed the fireplace or wood stove, it brings with it the mold spores that have taken up residence.

Dr. Chiu also notes that animal dander is a year-round allergen that becomes more problematic during the winter months when most houses are closed tightly to keep out the cold.

When the furnace fires up to heat your home, it helps to spread dust, mold spores, and even insect parts into the air you’re breathing. If you’re allergic to any of these irritants, you’ll begin to experience symptoms as you breathe them in.

What sets winter allergies apart from those you’re more likely to suffer in the warm-weather months is the fact that most people affected by them don’t even realize they have them, according to Stanley Goldstein, M.D., director of New York’s Allergy and Asthma Care of Long Island.

As Dr. Goldstein told Chicago Tribune writer Danielle Braff, winter allergies ¨just don’t bring patients out of the woodwork complaining, because many of them are just living with them. If you walk around congested very early in life, you don’t realize what it means to feel normal.¨

If they’re not simply accepting winter allergy symptoms as the way things are, many people mistake them for cold symptoms, which are very similar. However, there are some differences that may make it easier for you to determine just what is ailing you. As previously noted, colds rarely last more than a week, 10 days at the outside, so if you’re suffering from weeks and weeks of sneezing, watery and/or itchy eyes, runny nose, and coughing, a winter allergy is probably to blame.

So what can you do to protect yourself against winter allergies or at least minimize your exposure to the allergens most likely to trigger allergy symptoms? Drs. Chiu and Cohen offered a number of suggestions to WebMD that could help you reduce the misery of allergy symptoms throughout the winter months:

Among the many healthcare products available from eDrugstore.com are a number of medications designed to relieve allergy symptoms year-round. These drugs include Nasonex, Nasacort, Flonase, and Patanol. If you’re suffering from watery or itchy eyes because of allergies, Patanol can help relieve your symptoms.